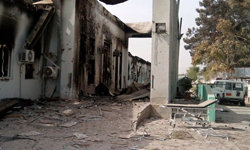 Bombed in the operating theatre

In the early hours of 3 October 2015, a US aircraft bombed what crew members thought was a Taliban compound in Kunduz, Afghanistan. It was, in fact, a hospital run by Medecins Sans Frontieres. Surgeon Mohammed Safi Sadiqi was in the middle of an operation. Here he describes what happened. This report contains an image some readers might find disturbing

It was my team’s turn to do the operations – we had scheduled about 40, and when the first bomb struck, I believe we were operating on the 30th or maybe 32nd person.

I was operating on a patient who’d been hit in the leg by a bullet. The injury was not an immediate threat to his life – he could have left the hospital if we had completed the operation.

I was almost finished when the bombing started.

I think the first bomb struck the intensive care unit, just 6m from the operating theatre where I was. When it hit, everything fell off the walls, things were dropping from the ceiling, and the windows blew out.

The lights went out across the hospital. Suddenly a big wooden panel from the ceiling dropped on to the patient on the table, right on top of him. We all ran. I went through the closest door, into the sterilisation room. Some people who chose other routes didn’t make it.

I couldn’t have done anything for the patient I was operating on. He was under anaesthetic, and we would have needed two or three people to move him. There was no time – there were just seconds to escape before more bombs dropped.

ut I did help another patient – a 12-year-old boy who had managed to escape with us into the sterilisation room.

There were about nine of us in that small room. There was also a guard who came in from outside. He’d been screaming because he was so scared.

It all happened in a very short time, so it was hard to tell what was going on. It was very panicky. It was a matter of life and death.

I can’t tell you how many bombs went off, it happened so fast. I saw flashes around the building, and we could hear explosions everywhere. The building caught fire after 10 or 15 minutes.

I was so panicked and so scared that I didn’t know what to do. I called my family so I could talk to them and try to forget about what was happening.

I called my elder brother. I told him exactly where I was and said: “I don’t know whether I’m going to live or die, but if I die you can find my dead body here.”

He was trying to reassure me, he said: “Don’t worry, stay calm.”

I told him: “If you know any minister, any elder with connections in the ministry, anyone, just tell them what is happening right now. It’s just a hospital, get them to stop the bombing.”

After that call, I felt a bit calmer.