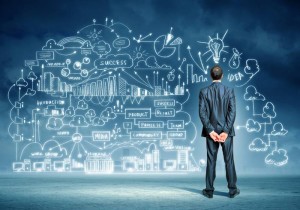 Businesses have always been found to address some need.

(1) That need is either already there, like a need for Transportation or,

(2) That need is created, like the Fashion and Cosmetics industry which feeds on the desire of people to look like Celebrities and People who they think are more Beautiful or Appealing than them when in fact they are not real but just an illusion created to lure you to business.

Anybody who does a business of its kind for the First time or in a Different way is called an Entrepreneur, and they like all others are trying to fulfill the need or address a problem.

Entrepreneurs just think about the needs and problems which others might think to be so trivial or non-important that they just overlook them or are thought to be too difficult to be fulfilled or solved. Entrepreneurs Have the GUT TO GO, and they thrive to just find some solution.

Once an Entrepreneur has done something, People realize that the need or problem was actually not that trivial or that it was not that difficult to solve and then everybody follows them.

So how do Entrepreneurs get business ideas? They think and try to solve problems rather than wait for someone else to come and solve it for them.

I am going to end this with a very famous yet unknown example: In 1886 a man in Switzerland was disturbed in the night due to a Baby crying next door. Mothers in Switzerland at that time had started thinking of Breast-Feeding as unfashionable and as at that time there was no proper nutritious alternative to breast milk, the children suffered from malnutrition and started dying. That man had a background as chemist and he knew what nutritious elements were there in a mother’s milk so he developed his own version of a baby-food by adding Cow’s milk, grain and sugar and gave that to the baby next door. The baby got well and that chemist started marketing his product. That man’s name was Henri Nestlé and today his company is known as NESTLE`.