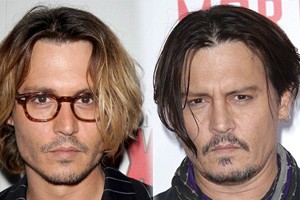 Johnny Depp shot to stardom as a teen idol due to his dark and mysterious looks and acting versatility, which scored him roles in films such as Edward Scissorhands and A Nightmare on Elm Street.

Having dated a slew of beautiful it-girls such as Winona Ryder and Kate Moss, before having two children with long-term partner Vanessa Paradis, the 51-year-old actor is now married to 29-year-old actress Amber Heard.

It seems the series of high-profile relationships and a long-term smoking habit has taken its toll on the actor, as he now exhibits duller skin and lacklustre hair.